The Realness Report - "AJ Styles: Still Phenomenal and Better Than Ever!" by The Real Dwayne Allen 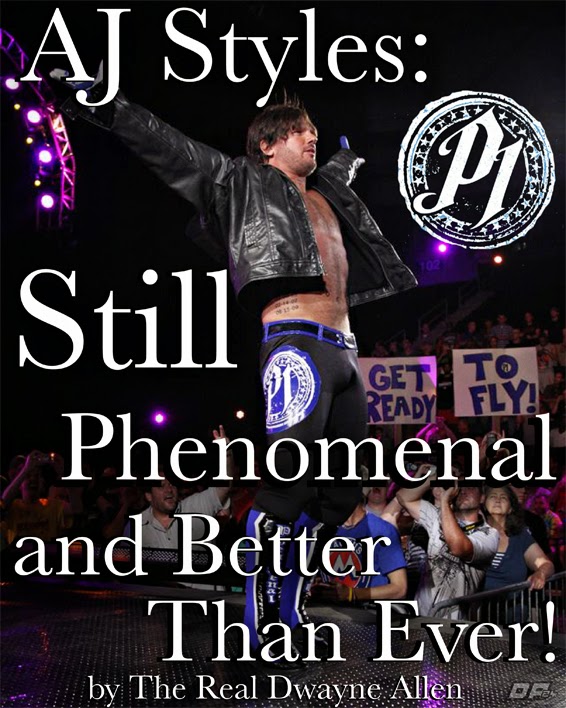 No contract? No problem. AJ Styles has shown the world of pro-wrestling that he CAN survive on his own and that he is better than ever.

In December of 2013, rumors began to swirl around in the pro-wrestling world that TNA Wrestling was beginning to feel the financial woes of their rather unsuccessful expansion to take their wrestling product on the road. The problem with all of this was that TNA's biggest superstar and only true home grown talent's contract was coming to an end.

Wrestling fans were beginning to question whether or not TNA could afford to re-sign AJ to a new contract and pay him what he deserves. Many were wondering if WWE would take this opportunity to snag AJ away from his home in TNA and bring his talents to the "big leagues". At the end of the day If you're not going to re-sign with TNA the most logical step would be to go to WWE right? Wrong!!

Fast forward to the contract negotiations where we we find out that AJ Styles makes it clear that he wants to stay with the company that made him a superstar but only for the right price. AJ felt that as the only true TNA original left in the company he deserved to be compensated for carrying this company on his back for the last ten or twelve years. He also made it clear that if the money wasn't right he didn't plan on sticking around. 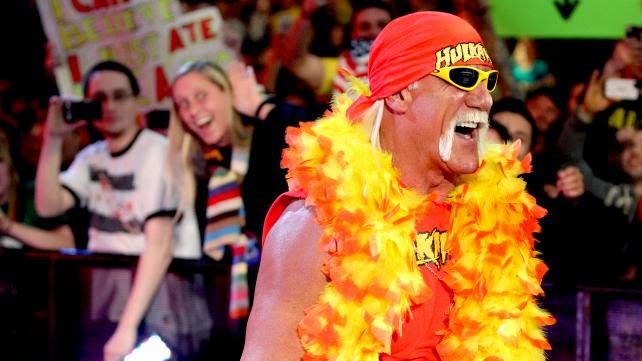 As TNA's struggles continued, Hulkamania packs his bags and heads back home to WWE while Jeff Jarrett, who was recently brought back to help backstage, decides to walk away from the company him and his father Jerry Jarrett built from the ashes of WCW. So what did that mean for The Phenomenal One's future in TNA Wrestling? Let's keep exploring. 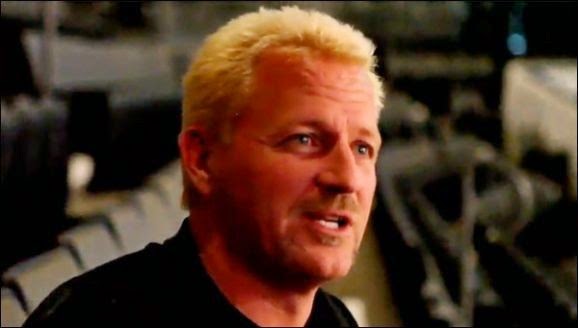 So we eventually learn that, like a good soldier, AJ Styles makes it clear his commitment to TNA by informing company officials that he won't ask for more money but rather talk about a contract extension. You would think that this would be enough of a sacrifice for TNA to keep their top star of the last ten to twelve years right? Wrong again!!! TNA could no longer pay AJ Styles what he had been making for years. That was the final straw. AJ Styles left TNA Wrestling after almost twelve years.

With AJ leaving TNA, fans from all over were buzzing because no one (including AJ) could imagine TNA not resigning their top star. They paid Sting what he wanted, they paid Kurt Angle what he wanted but yet they just didn't feel justified in paying AJ Styles what he wanted? Yes I know, it doesn't make sense to me either.

You ask yourself, was this really a bad thing? I mean, it's not like AJ has had extremely successful runs in TNA. Sure he was the peoples choice but it's not like TNA always treated him with the respect he deserved. TNA prides itself as a company that's like a "family" but it's not, its a business in which you need to cut costs and generate profit. To be honest, lets not pretend that TNA hasn't seen better days and is on decline as we speak.

So after all the hoopla and speculation I guess that means AJ Styles is a free agent and is open to all these new opportunities including a run in WWE. There's nothing stopping him from heading north to WWE right? Wrong again!!!!! What if the WWE doesn't want him? Huh?

That's right, it turned out that after all the contract speculation and negotiations with TNA, WWE had no interest in signing the former TNA world Champion stating that "they wanted to focus on their homegrown talent and building new stars". Can you really be mad at that? Isn't that why WCW folded? Isn't that why TNA is falling, not focusing on new stars? But…………it's AJ Styles for goodness sake!!!!!! Why would you pass on a talent like AJ Styles? Well that's a different story for a different day.

What does that mean for AJ Styles??? Back to the independents??? Can the AJ Styles brand survive on its own without a national promotion or "the machine" to give him a national platform to show why he STILL is The Phenomenal One? YES HE CAN!!!!!!!!! 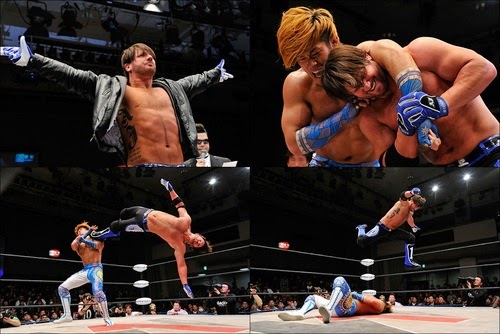 Since AJ Styles departure from TNA Wrestling, he has traveled the country putting on "phenomenal" matches showing that his career is alive and well. AJ Styles has defied the odds and has continued to be a household name by returning to promotions where he got his start, especially pro-wrestling alternative Ring of Honor. Without any restrictions, or cheesy story lines, AJ is performing at a high level each and every night and is giving the fans everything TNA Wrestling has deprived us from in the last ten or eleven years. An unrestrictive Phenomenal One.
Returning to the independent circuit, we as fans have enjoyed rekindled feuds with former opponents such as Roderick Strong, Chris Hero, Kevin Steen and many more. Making appearances for ROH was just the first step in revitalizing the career of AJ Styles. 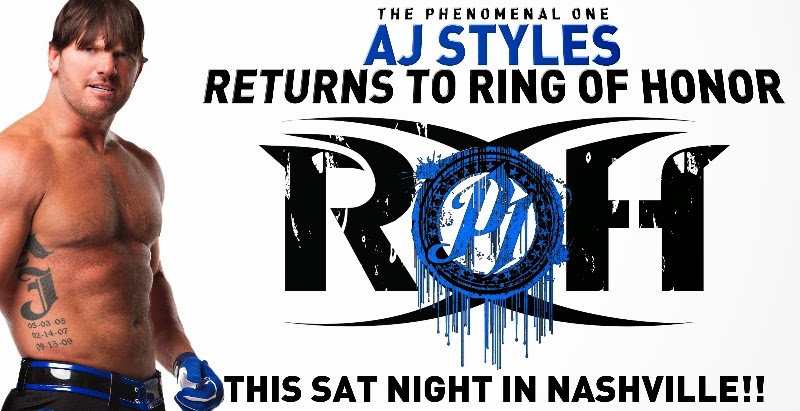 Seeing AJ Styles in an ROH ring was like a homecoming. We haven't seen him in a Ring of Honor ring since 2006 when TNA decided that their signed talent could no longer appear in ROH DVD's. His match against Roderick Strong signified his return to "real" pro-wrestling and too be honest, I prefer it that way. On the independent circuit, we are seeing an AJ Styles that we haven't seen in years. His true style (not that watered down TNA product we saw in the later years) has been resurrected. That hard nose, gritty style of wrestling that you often see in independent wrestling and overseas is a style that fits AJ Styles so well. It's what made him "phenomenal" before and it's what has made him "phenomenal" again.

According to the Wrestling Observer AJ Styles has signed a new one year deal with the legendary Japanese pro-wrestling company New Japan Pro Wrestling. AJ Styles' resurgence continues as he takes his talents to Japan to re-establish himself as a global superstar with potential match ups against NJPW's  top stars Hiroshi Tanahashi, Nakamura, Shinsuke Nakamura, and Kazuchika Okada.


With all that being said, there still remains a few questions. What if WWE eventually takes notice and decides they want to bring in AJ Styles now that his TNA buzz is over?  Would I still like to see AJ Styles in a WWE ring one day? Part of me does but at this point I say…………NO!!! Why not, especially when I was one of the biggest advocates that wanted him to sign to the WWE? Why the change of heart? 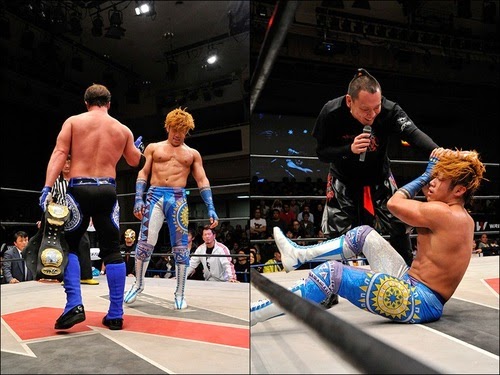 Simply put, it's like this. It's no secret that WWE didn't want AJ Styles simply to send a message. The last thing WWE wants to do is give the impression that TNA is on the same level with them. So in order to prove that, they can't sign the biggest star in TNA history because it gives up and coming talent the impression that they can go to TNA and be a top star and jump ship to WWE when your ready for  legitimate pay day.
It's no secret that WWE wants the world to believe that there's only one national promotion that matters and that it's impossible to become a legitimate global superstar anywhere but in WWE. Signing AJ would prove otherwise. WWE needed to make it clear that TNA is not WCW and is not on par with them in any way shape or form. They needed to show the world, fans, and wrestlers alike that they didn't need TNA's former top star.

You don't believe me? I'll prove it. Look how Christian was treated after re-signing with the WWE. He was forced to start at the bottom on WWECW. He was placed at the bottom of the developmental brand to prove himself and earn his way back into the hearts of WWE officials. Even when he earned his way back into the main event, he was and has always been treated as inferior to guys like Randy Orton, Sheamus, and Alberto Del Rio. 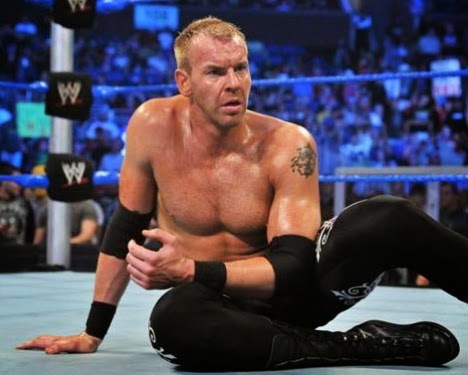 Still need more proof? WWE was interested in TNA talent that had not been properly used at the time. Guys like Bobby Roode and James Storm were approached years ago to join WWE before they had legitimate runs in TNA. Needless to say, those guys opted to stay believing TNA was the "future" of pro-wrestling (it's not smh). Another point. When Matt Morgan asked for his release, he was in talks with WWE. How? I thought WWE wanted to focus home grown talent? Correction, WWE wants guys who they can get over and take credit for.

WWE can never take credit for Christian's main event run in TNA that established him a true hall of famer, nor can they take credit for AJ Styles' TNA run. Maybe after a few years on the indy circuit WWE will look him differently but what then? Will they let him be The Phenomenal One???? Will he end up like Christian and be booked as second rate B+ player?

If you ask me, it's not worth the risk. AJ Styles should continue his run as an independent brand traveling all over the country and the world putting on matches that we won't always see in the WWE. he should only sign with the WWE if it's mutually beneficial to both parties.