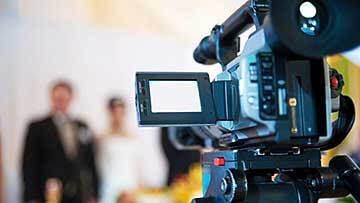 As we all know, the universal units of composition are the long shot, the medium shot, and the close-up. These shots are a development of the continuity system insofar as they are overlapping portions of a single space and only make sense in relation to one another. That is, they are used together to create a consistent spatial/temporal order. Though they can be used to describe spaces as large as the solar system or as small as the head of a pin, we always know approximately how large an area is being framed when these terms are used. That's because the shots are scaled to the subject and related to one another proportionately.

The change of size from shot to shot varies but is determined by the limits of identification. As long as we recognize that each shot is an overlapping portion of the wide shot, the change in scale is permissible. Actually, even this definition must take into account the change in editing styles over several decades. The move from wide shot to close-up was taking up place. Today, after several decades several decades of familiarity with Hollywood conventions, audiences easily accept extreme changes in scale. If anything, it is likely that the conservative editing rules of the past lagged behind audience understanding.

Visual recognition between shots, however, is only half the strategy of the continuity style. Most often the relationship between shots is one of implication or interference. For example, we see a wide shot of a man approaching a door. This followed by a cut to an extreme close-up of the man's hand turning the doorknob. Even if the doorknob was too small to attract our attention in the whole shot, we expect that it is connected to the previous shot since it makes logical sense, even though we could be looking at another doorway in a different place and time. Narrative logic and the visual connection between shots cooperate to create a sense of continuous space. The pair of ideas, cause and effect and spatial recognition, provide the organizational basis of the continuity style.

Long shots, medium shots, and close-ups can describe any subject or location but are most often used to describe any subject or take on special meaning in this connection. Here the change in scale between shots is not related by logic or visual recognition alone. Instead, framing is determined by conventions of post-Renaissance art or what are generally considered pleasing and balanced compositions.

- Film Directing Shot by Shot: Visualizing From Concept to Screen by Steven D. Katz
Posted by The Real Dwayne Allen at 6:57 PM