The Baltimore Ravens are heading to the 2013 Superbowl in New Orleans!!!!!! 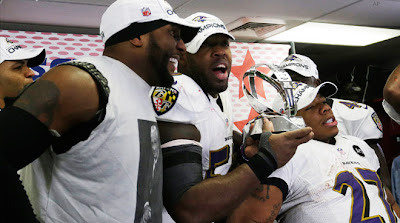 Well there you have it, The Baltimore Ravens, led by leader Ray Lewis pressed forth passed adversity once again as they walked in Foxboro as underdogs and walked out as AFC North Champions are heading to the Superbowl!!! Once again Baltimore was not he favorite and majority of sports analyst crunched their numbers and reviewed their stats to continue to explain the Ravens had very little chance of beating "the great" Tom Brady (not so great) and the almighty Patriot bunch. All week long, the city of New England taunted Ray Lewis as they predicted that Ray Lewis retirement party would take placed in New England and the destined run by the Baltimore Ravens would come to an end. "With man, it is impossible, but with God all things are possible". The faith that is established in the Baltimore Ravens organization is evident as Ray Lewis and many others within the organization, as many others have adopted having a faith based mentality believing that if The Ravens did everything they were supposed to do they would come out as victors. The ride continues on to the last stop in New Orleans for the Superbowl.
Posted by The Real Dwayne Allen at 6:29 AM