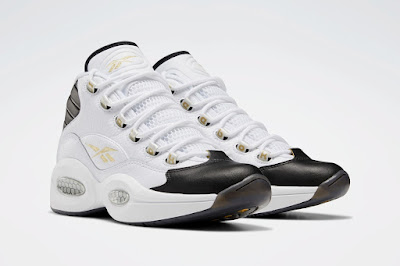 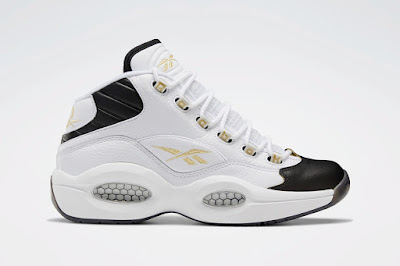 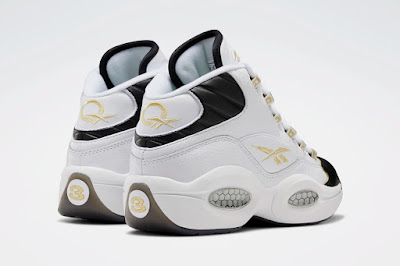 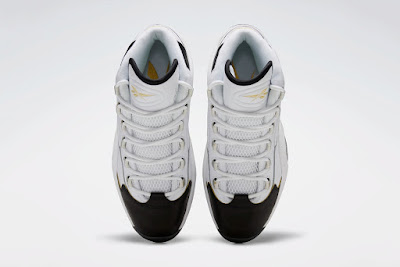 Reebok has re-crafted Allen Iverson‘s iconic Question Mid in styles ranging from “Georgetown” to grey suede over the last few months, and the latest makeup to join the nostalgic parade is a crisp “Black Toe.” Taking on a striking colorblocking scheme centered around a bold toebox, the “Black Toe” nods to the Question‘s genesis in 1996 — Iverson’s rookie season — but offers a look all its own.
Split between supple white and black leathers, the upper offers a yin and yang style. The majority of its real estate is claimed by white leather, but black hues on the heel, collar and aforementioned toebox provide stark contrast. Metallic gold makes its presence felt as well by appearing on each and every branded hit. These range from the midfoot and tongue vector logos to the heel’s Question and “3” hits plus the Reebok spell-out that runs down the eyestays. It’s also used as trim around the forefoot.
Thick midsoles boast exposed DMX cushioning pods, and the outsole presents a smoky, semi-translucent black hue with more metallic gold embellishments to complete the look. Thanks to cut and color alike, these Questions are reminiscent of the Air Jordan 11 “DMP” from 2006’s memorable Jordan Brand pack.
The Reebok Question Mid “Black Toe” is set to release via the Reebok webstore on March 13, and is priced at $140 USD. via Hypebeast.com

Posted by The Real Dwayne Allen at 6:49 AM