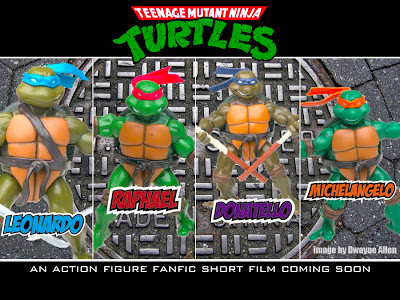 This is the first promotional poster/art work for a new project that I am working on produced by Starforce Productions. I will be doing an action figure fanfic short film about the Teenage Mutant Ninja Turtles. The concept and name will be revealed at a later date. I did the promotional poster/artwork from scratch, including the graphics for the names. I did them from scratch in Adobe Illustrator and then put everything together in Adobe Photoshop. The pictures of the action figures are the factory images of the 2002-2003 TMNT action figure toy line from Playmates that will be used in the short film. The NYC sewer photo was a random picture I found of a new york city manhole cover on Google. I also got the Teenage Mutant Ninja Turtles 1980'-90's logo from Google as well. I made the picture frame/bracket myself on Photoshop and then put it all together to make this promotional poster for the upcoming project. More artwork and promotional poster will be released coming soon. For more up to announcements and news on the project, follow Starforce Productions on Twitter @Starforceprod. All trademarks, images and rights reserved are owned by Nickeldeon, Viacom.
Posted by The Real Dwayne Allen at 1:20 PM