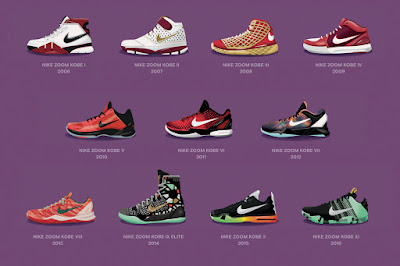 In his final NBA All-Star appearance, Kobe Bryant received a hero’s sendoff, one filled with visual tributes, speeches and the adoring admiration of his peers. Nike Basketball is also inspired by Bean’s 18th and final All-Star game, and it’s prompted an illustrated tribute to his footwear collection for the game.
Dating back a decade to the Nike Zoom Kobe 1, the past 10 years have seen Bryant lace up in some of the very best All-Star footwear we’ve seen. That continued last night with the latest iteration of the Nike Kobe 11. And while his signature line will continue long past his playing days, it’s still to wonder if All-Star sneakers will be a part of that ongoing process.
Give Bean’s All-Star footwear catalog a look below and stay tuned for more on his farewell tour. via NiceKicks.com
Posted by The Real Dwayne Allen at 2:55 PM