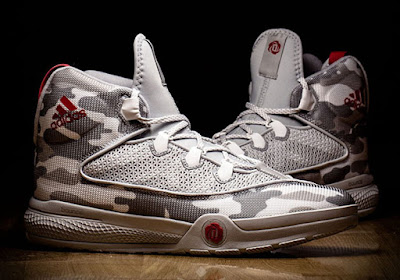 A new adidas D Rose silhouettes has touched down known as the adidas D Rose Dominate 2016.
The Dominate silhouette returns for 2016 with a new look in what will be at least two different colorways. The first pair has a Chicago Bulls theme to it as red dominates (no pun intended) the upper in a a quilted textile material with black accents landing on the midsole, side panels, tongue and inner liner. The second pair features a white and grey camouflage upper with red detailing on the branding and heel tab. It’s also important to note that the Dominate 2016 does not feature BOOST cushioning and instead goes with Bounce foam to make them more affordable but still comfortable.
You’ll be able to grab the adidas D Rose Dominate 2016 at select adidas retailers in the near future. In the meantime let us know your thoughts on the silhouette in the comments below.
via: ATAF

Posted by The Real Dwayne Allen at 9:30 AM