The "Real"ness Report: Will We Finally Get The Undertaker vs Sting at Wrestlemania 30? 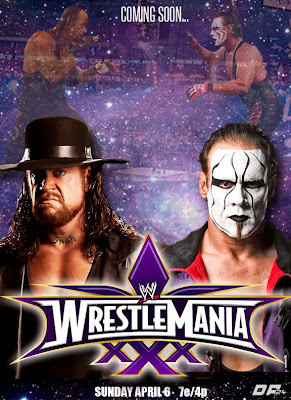 Wrestling fans have been trying to get this match up for a few years now. Will we finally get "The Icon" vs "The Phenom" at WrestleMania 30??? Only time will tell and judging by the traditional rumors about Sting's contract being up in January, I felt creating this poster was necessary.

I think this year will be the closest year that we have to finally getting Sting to sign a deal with the WWE. I feel Sting has a lot to offer WWE and the pay off will be worth it. Naturally, there are a number of concerns that many wrestling fans have. Many are afraid that with both The Undertaker and Sting being up in age, the match itself will not be worth the hype. Let's examine this theory.

With both Sting and The Undertaker being at the end of their in-ring careers, it's no secret that neither one of these superstars can do many of the things that they used to do in their prime. On the other hand, these two legends in the ring have exceeded pass many of their peers who have called it a quits. So the question still remains, can these superstars pull this match off and give the world of professional wrestling an instant classic?

It is said that if we do not learn from history, then we are doomed to repeat it. So I challenge you to look at another feud in similar fashion. The two biggest stars in pro-wrestling during the 1980's were undoubtedly Hulk Hogan and "The Nature Boy" Ric Flair. Hulk Hogan and the World Wrestling Federation gave birth to "Hulkamania" while the National Wrestling Alliance and Jim Crockett Promotions gave way to the popularity of Ric Flair and the Four Horseman. This is arguably considered the first boom period in pro-wrestling. Hulk Hogan and Ric Flair were the two most recognizable pro-wrestlers in the world. Every wrestling fan during that period at some point asked themselves a single question "what if we got a match between Hulk Hogan and Ric Flair? Who's the undisputed heavyweight champion of the world?". Now by this time, the days of inter-promtional wrestling matches between world champions were over. There was no way something like this could happen.

So fast forward a few years when Ric Flair leaves World Championship Wrestling and joins the WWF in 1991. It has been noted that there was supposed to be a planned program between Hulk Hogan and Ric Flair. Fans were finally going to get to see the dream match that many fans had wanted to see for so long. But would it live to the hype? Fans would never get the chance to see Hulk Hogan vs Ric Flair in their prime. Today there have been many debates about whether or not the WWE (WWF at the time) should have taken the risk and given us Ric Flair vs Hulk Hogan at WrestleMania VIII. There were many concerns about their age, quality of in-ring work etc. There was a fear that a WrestleMania match between the two biggest superstars of the 1980's would ultimately be a let down. Some argue that they could have pulled it off and gave fans the dream match they'd had only fantasized about until that point. Others feel that based of the test matches between the two in a few house shows on the road, they could only put on a mediocre match at best.

To bring this full circle,  many fans are faced with the exact same dilemma today when asked if they want to see The Undertaker vs. Sting in 2013. Some feel that they can pull it off and make history at WrestleMania. Others feel that this match is past its prime and it's better not to have it than have it and it be a disappointment or letdown.

Do I think The Undertaker and Sting can pull this off???? HECK YEAH I DO!!!!! I believe that they will put on a show to remember and show the world that these "vets" have enough to contribute to the history of pro-wrestling. I say BOOK IT!!!!!!

@dwayneallen24
@wrestlingwrealm
Posted by The Real Dwayne Allen at 4:21 PM

Email ThisBlogThis!Share to TwitterShare to FacebookShare to Pinterest
Labels: The Realness Report