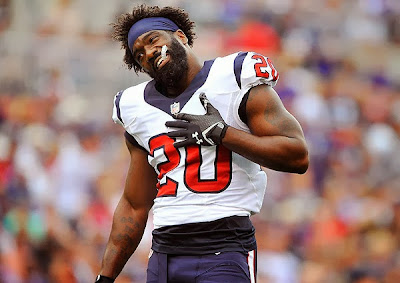 I understood why he left and honestly I didn't blame him. Ravens know how injury prone and unproductive S Ed Reed can be. The problem in this situation is, the Texans organization is not loyal to the Ed Reed brand.

There's things that Ed Reed has done with the Ravens and has gotten away with it because the organization was loyal to him. He was a staple in defense and a true fan favorite. This future Hall of Famer was "wined and dined" by the Texans organization and offered more money then he's honestly
worth..........that's until he showed up with a torn labrum in his hip.

Ed Reed played the same way in Houston as he did in Baltimore but the difference this time is that he didn't have the organization to support his poor play. With Ed Reed in Baltimore, if he wasn't productive, at least he drew a crowd. He was a fan favorite and that was good enough for the Ravens organization. The unfortunate truth is that no other organization will put up with Ed Reed's un-productivity on the field. In any other organization he's just another tool paid to a job.

With his best days behind him and his shortcomings spread throughout the sports world, what will he do next? Will he sign with a contender to make one last playoff run? Will he finally get the opportunity to play for Bill Belicheck? Or will he re-sign with the Ravens only to retire under the black and purple banner. Only time will tell but once he clears waivers it will be interesting to see what happens next.
Posted by The Real Dwayne Allen at 9:13 AM