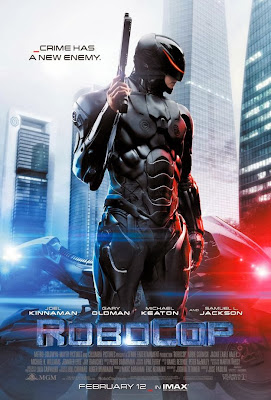 Now I have my reservations about this movie. Robocop has always been a popular icon in the world of big screen super heroes. The original Robocop was considered ahead of its time but in 2014 is this really something we haven't seen already? In this techno-driven age, is the concept of "Robocop"???

Ok so lets get away from this idea or concept being "ahead of its time". Will this be a successful reboot? Right off the back, I'm not a huge fan of the suit but I understand that you must change with the times. I also understand that watching the trailer, I saw a test suit that looks more like the original suit but is changed for a more tactical look in black.

So set aside the concept and the suit and let's pretend this is not Robocop but named something else. How would I like it then? From what I've seen, it looks pretty cool. It has enough of the original concepts of what made the original Robocop a success with an updated twist. For now I'll keep my reservations and wait to see the movie to see how it turns or if it lives up to the hype of the original.
Posted by The Real Dwayne Allen at 8:18 AM