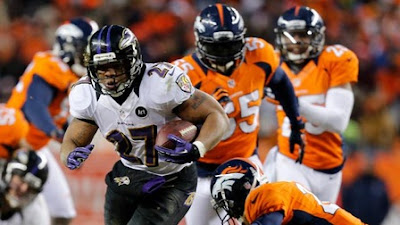 The new look Ravens open up the season tonight against the Denver Broncos at 8:30pm.

Defending Super Bowl champions, Baltimore Ravens will have plenty to prove after losing a number of key players including veterans Anquan Boldin, Ed Reed, and heart and soul of the Ravens organization Ray Lewis.

The Ravens were able to walk in to Mile High Stadium and punch their ticket to the AFC Championship Game after a last minute "Hail Mary" pass to wide receiver Jacoby Jones for the game winning touchdown.

The pass that lives on in infamy amongst Peyton Manning and Broncos fans  will undoubtedly play be a motivating factor in trying to hand the Super Bowl defending champion Ravens their first lost on their road to a repeat.
Posted by The Real Dwayne Allen at 7:51 AM