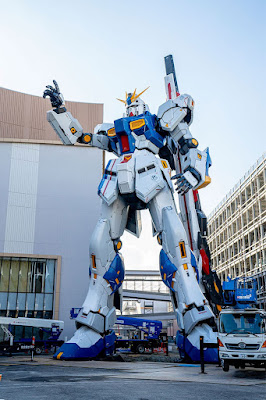 Japan‘s newest life-sized Gundam is coming to the Mitsui Shopping Park LaLaport Fukuoka in Spring 2022. The 1:1 RX-93FF V Gundam project was first announced back in September by Bandai Namco.

Standing at 81.3 feet tall, the Gundam is a play on Amuro Ray’s Nu Gundam from the 1988 Char’s Counterattack. Prolific Gundam creator Yoshiyuki Tomino was also involved in the design of the statue as well as the new tri-tone color scheme. The RX-93 Nu Gundam is expected to be the tallest Gundam model with a height of approximately 65.6 feet (20 meters), towering over Tokyo’s full-size RX-o Unicron Gundam, Yokohama’s RX-78-2 Gundam and Shanghai’s ZGMF-X10A Freedom Gundam. A key feature of the Fukuoka Gundam is that it will include a long-range Fin Funnel.

While there are still some finishing touches that need to be made for the Fukuoka Gundam, the life-sized statue is on track to be completed by the end of February and will be open to the public in April 2022. Take a closer look above at the Gundam. via Hypebeast.com

Posted by The Real Dwayne Allen at 3:05 PM