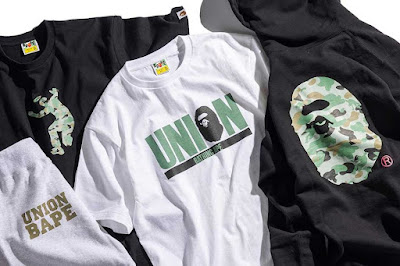 Union is wrapping up its 30th-anniversary celebrations with BAPE, yielding a collaborative collection as steeped in history as it is in mutual respect. It ties up the impressive run of exclusives that the retailer launched throughout 2021, ending on a suitably strong note.

Logos like the APE HEAD and Union's Frontman are mashed up across a spread of athleisure staples like hoodies and sweatpants in the anniversary capsule, yielding some surprisingly understated BAPE pieces.

Considering that the Japanese company most recently issued a statement Minecraft collab and neon-tinged ROAD-STA sneakers, it's nice to see BAPE drop some low-key apparel instead of anything especially flashy.

That being said, considering the BAPE-STA's big year, it would've been nice to see BAPE's signature sneaker get the Union treatment. via Highsnobiety.com

Posted by The Real Dwayne Allen at 2:48 PM