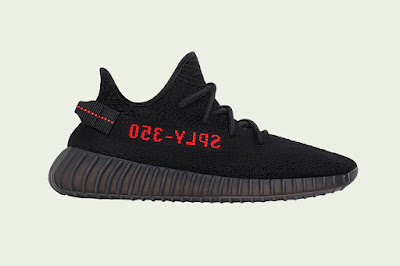 Sneakerheads rejoice as the adidas Yeezy Boost 350 V2 is set to return in its beloved “Bred” colorway. Earlier this summer sneaker insiders Yeezy Mafia revealed the adidas Yeezy Boost 350 V2 “Bred” is expected to restock worldwide in December, three years after its original release. Now Kanye West himself has confirmed a release date, which is scheduled for December 5.

Dressed in a predominately black outfit, the sneaker features a black Primeknit upper paired with tonal black laces and a matching encapsulated Boost-assisted midsole. Adding a contrasting look is the red “SPLY-350” verbiage strewn across the medial and lateral walls, along with red stitching on the heel pull tabs.

Look for the adidas Yeezy Boost 350 V2 “Bred” to land December 5 at select adidas retailers, for a retail price of $220. The sneaker will also drop in full family sizing, so the little ones can get in on the fun as well. via NiceKicks.com

Posted by The Real Dwayne Allen at 4:52 PM