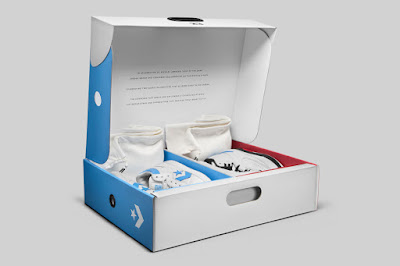 Michael Jordan's first professional contract contained a unique clause: the "Love of the Game" proviso would allow the UNC grad to compete in off-season pickup games. MJ would go on to invoke the clause for a UNC alumni game in 1986, in which he unknowingly debuted his original player edition, a Chicago "home" colorway of the Air Jordan 2, featuring Carolina Blue on the heel. The following year, he opted for a low version of the 2 in his alma mater's team colors. Jordan Brand combines the designs of each of those Air Jordan 2 models for the new "Love of the Game" pack, twinned with the Converse Fastbreak, the shoe that Michael wore during the 1984 Games.
Check out detailed looks below, and expect the "Love of the Game" pack to hit stores on June 28. via FreshnessMag.com
Posted by The Real Dwayne Allen at 4:01 PM