Reebok Is Bringing Back the Shaq Attaq in 2017 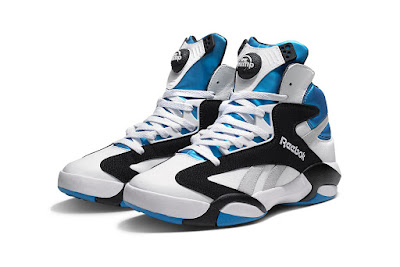 Last year, Reebok resurrected the beloved Shaqnosis, opting for a colorway inspired by The Diesel’s stint as “The Big Shaqtus” in Phoenix, even throwing in its proprietary PUMP system for good measure. Now Reebok is doing the same with Shaquille O’Neal’s rookie kicks. And best of all? The drop stay true to the original.
Returning for the first time since 2013 and hot on the heels of last year’s Sneakersnstuff collab, the OG version of the Shaq Attaq echoes the look of 2013′s retro and appears to be a near one-for-one reproduction of the kicks Shaq donned on his way to PPG averages of 23.4 points, 13.9 rebounds and 3.5 blocks for the Orlando Magic and 1992-93 Rookie of the Year honors. Dressed in black nubuck and white leather with a dash of light grey suede, the kicks are highlighted by shiny “Orlando Blue” accents throughout, PUMP tech and Reebok’s first-ever use of Graphlite.
Retailing for $160 USD, the “Orlando Blue” edition of the Shaq Attaq will return to Reebok retailers sometime early next year.
SOURCETHE SHOE GAME
Posted by The Real Dwayne Allen at 5:04 PM