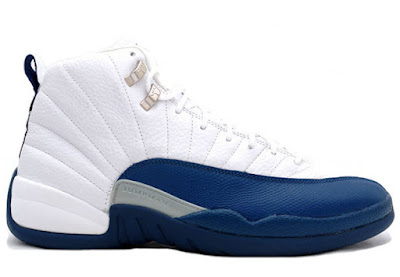 The Air Jordan 12 French Blue may not be an OG colorway, but many adore it more than classic iterations of the silhouette. Last seen in 2004, the popular finish is finally scheduled to receive its first retro treatment after twelve years, as the model celebrates its 20th anniversary in 2016.
Maintaining its distinctive palette overall, the silhouette is comprised of White tumbled leather, while French Blue overlays are prominent on its forefoot, outsole unit and rear portion. Metallic Silver accents provided by the top eyelets, Black Jumpman branding on the tongue and subtle Grey panels on the sides consist as notable contrasting elements. via kicksonfire.com
Posted by The Real Dwayne Allen at 6:39 PM