The Realness Report - Shawn Michaels vs. Bret Hart: The Ladder Match That Changed Everything For Me. 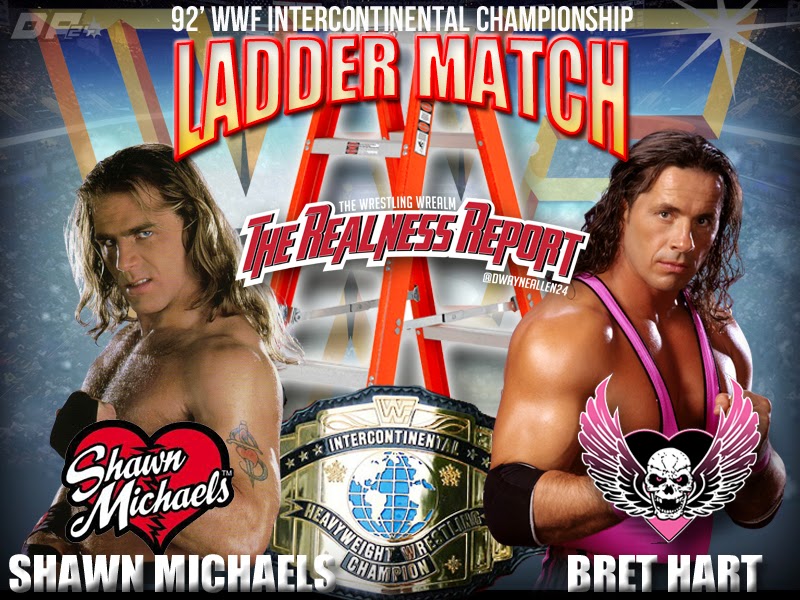 I remember like it was yesterday. It was May 8th 1993 on a Saturday night when I sat in the basement with a spirited group of elementary school kids for my cousin’s birthday sleepover.

After an evening of go-kart racing, eating junk food, and acting silly, it was time for my cousin to finally open his presents. Let’s be honest, half the time we went to birthday parties was because we wanted to see what new toys our buddies got and how we were going to finagle a trade or cash in some favor in which they had to let you hold it for a week. But anyways…

Present after present, and nothing really caught my attention until the moment that rocked that sleepover to its core and dang-near caused a riot (or it could’ve honestly been the over eating of cake and potato chips). My cousin pulls out what seems to be a VHS tape wrapped in old comic book newspaper. He tears through the newspaper wrapper to reveal a brand new WWF tape from Coliseum Home Video! Never mind the other gifts, we wanted to see some wrestling.  It was a 1993 WWF compilation tape called “Smack em and Wack em” with a set of matches from 1992. 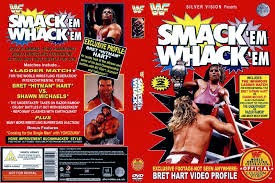 As soon as we saw the tape, the ruff-housing and wrestling began! The struggle for the foam WWF championship toy belt my cousin had was officially on. In an attempt to calm down this rowdy group of junk food filled kids, my uncle would only agree to put the tape on if we settled down and stopped trying to body slam and leg drop each other.

It was like a marathon of wrestling. Match after match after match, it seemed like the matches kept coming. There were a few gems on that tape like Ric Flair vs. Bret Hart, and The Undertaker vs. Razor Ramon but one match in particular caught my attention.
It was Bret Hart vs. Shawn Michaels in the WWE’s first ladder match for WWF Intercontinental Championship on July 21, 1992.

I personally was no different from most kids with a short attention span. Of course we were all pumped to watch the WWF wrestling tape but it was also late and we began to crash from all the birthday festivities and sugar we consumed. There was something different about this match in particular. As tired as I was, I was locked in to this match. Everything HBK and The Hitman did had me looking for more from Bret Hart and Shawn Michaels. 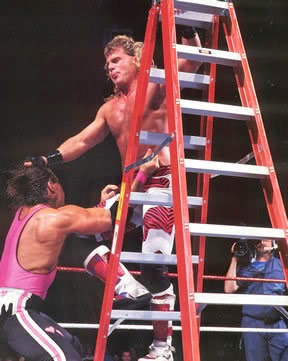 While trying to find so much coverage on Shawn Michaels vs. Bret Hart, I didn’t realize it but I was educating myself on so much that had happened with both Shawn Michaels and Bret Hart in the previous years. I had caught up on everything Bret Hart had done in the World Wrestling Federation from 1990 to 1993. Shawn Michaels on the other hand was just getting started in 1992, but it was the birth of “the Heartbreak Kid” persona.

I had found my two favorite wrestlers. That one match sparked a lifelong fandom for Bret “The Hitman” Hart and “The Heartbreak Kid” Shawn Michaels. Everything I did wrestling related had something to do with Bret Hart and Shawn Michaels. Although I had to settle for separate matches in the early 90’s from the two, in my world, I always found a way to recreate that one matchup that I saw on a WWF Coliseum Home Video in 1993.

I would draw paper wrestling figures and accessories at lunch time and cut them out and continue to recreate my favorite matchup over and over again. Bret Hart vs. Shawn Michaels, complete with a paper ladder and a paper championship belt. I would do this just about everyday until one of two things would happen. One, the paper action figures ripped and I would have to recreate them or two, my teacher would take them away from me for playing with them during school time.

Starting out, Bret Hart was the top guy of my two favorites because in 93’ Bret’s career was further along than Shawn Michaels’. That would begin to change later that year when I witnessed the ladder match from Wrestlemania X with Shawn Michaels and Razor Ramon. Shawn Michaels skyrocketed into the atmosphere and things became more increasingly complicated for me as a fan of both. Bret Hart was still atop of his game but Shawn Michaels was evolving and the “Kliq” (HBK’s fans) was starting to take over. So you can imagine the conflict I had when Bret Hart and Shawn Michaels met at Wrestlemania XII in an iron-man match, although I enjoyed 60 plus minutes of Bret x Shawn at Wrestlemania (which is still to this day my favorite match of all time). 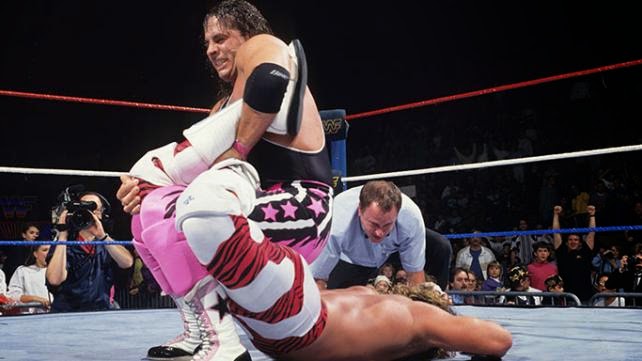 When I decided that paper action figures could no longer suffice, I came up with the genius idea of “why don’t you start collecting the actual WWF action figures?” Pure genius. As a kid during the 90’s, I didn’t have access to any catalogues or any Internet access with a WWF action figure checklist or anything. So my best bet was to try to convince my mother to go the mall or Kmart so I can check out the toy section to get an idea of what WWF action figures look like and if I can find suitable replacements for my paper wrestling figures.

It was finally my day and we were heading to the mall for whatever reason and the first thing I asked my mother was, could I go pass KB Toys and she usually never had a problem with that as long as I didn’t ask her to buy me anything. I turned the corner then looked up and the first thing I saw left me speechless. I saw my one half of my favorite wrestler/s, Bret “Hitman” Hart in a blue and black carded package with a big blue WWF block logo that said “WWF Slammers” by Jakks Pacific complete with “bone crunching action”. I grab the action figure and held it in amazement. Some people may look at all this as overkill but I knew this short period of time was the only time I was going to be able to remember how cool this action figure really was. There were no camera phones so I couldn’t take a picture or anything so all I had was a few moments. 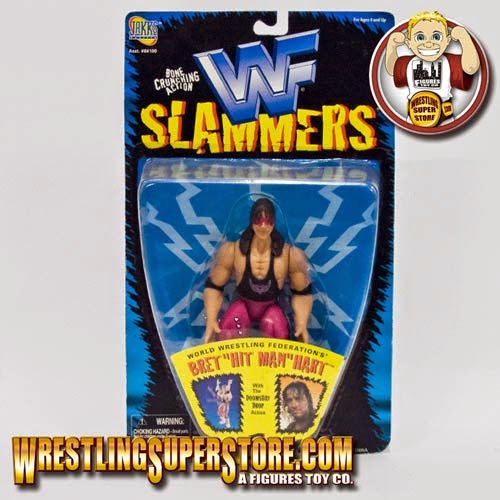 Once I gathered myself, I took a look around at the other WWF action figures to see what else was available and looked on the back of the figure packaging card. I looked up further on the shelf and found the next thing I was looking for, a wrestling ring. There it was, the WWF Raw is War Monster Ring! It was huge. I looked on the back to see a Bret Hart action figure in the ring with Stone Cold action figure and a referee in the ring. They also had a Vince McMahon on the outside of the ring with a Sunny figure. The next thing that I saw answered my next question. Is there a Shawn Michaels action figure and what does it look like? There it was, a Shawn Michaels action figure on the ropes in blue tights and black zebra tights looking to interfere with the action figure wrestling match going on in the toy ring. 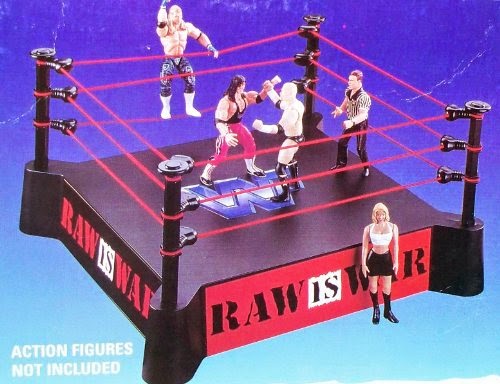 
@Wrestlingwrealm
Posted by The Real Dwayne Allen at 2:51 PM