"Could Nike or Under Armour Take Over the NBA Contract in 2017?" 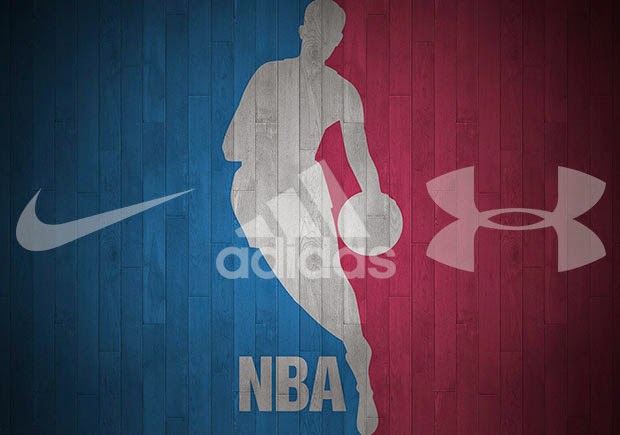 2017 will be another key year for the basketball sneaker brand arms race. adidas’ current contract with the NBA will expire then, and while German-born brand will surely do what they can to re-up on the current deal to keep all NBA team jerseys outfitted with stripes, there’s no doubt that their biggest competitors in Nike and Under Armour will join the fray. Basketball is huge when it comes to gaining ground in the U.S. market, and while Nike has enjoyed its position as the dominant label (over 85% of the market share), recent moves by both adidas and UA suggest that Nike will have increased competition in the future.
Nike will always be considered a favorite when it comes to owning any prime basketball-related real estate, and with the added pressure from other brands, they’ll pony up the dollars to gain that ground. The battle for Kevin Durant was a clear example of two things – Nike is ready to spend, and Under Armour is ready to spend more. But the latter brand isn’t trying to buy their way up; they’ve been incredibly successful with their first-ever signature basketball athlete in Steph Curry, a player who is considered to be among the most popular in the NBA and a likely face for the future of the league. Curry also makes Under Armour far more attractive than ever, so it wouldn’t be too surprising to see up-and-coming stars or perhaps even the established ones to switch over to Baltimore. Nike, of course, recognizes the aggression that UA has been coming with, so if they choose to bid and potentially become the official outfitter of the NBA, the added bonus will be keeping its fellow American brand at bay.
All that said, adidas can’t be counted out. They are, in fact, the current tenants, and despite its criticisms of the sleeved jerseys, lackluster All-Star designs, and the fact that their U.S. basketball market share is far behind Nike, the brand has made a pledge to focus a lot more on North America in terms of marketing direction and so on. Do you think adidas is doing a good job with their time as the NBA’s official apparel provider or would you rather see Nike or Under Armour get a shot? Let us know in the comments.
Source: Barrons via SneakerNews.com
Posted by The Real Dwayne Allen at 4:21 PM