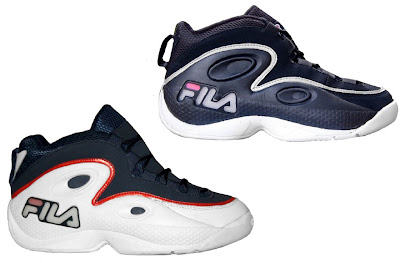 Finally after 19 seasons, Grant Hill retires from the NBA. Grant Hill recently spent his last season with the Clippers and to no one's surprise, he was injured half the season. It was about time that he hang up the pro basketball "sneaks" and call it a career. It's a good thing he didn't sign with the Lakers, we got enough injured old farts as it is, but that's a different story for a different day smh.

After the successful re-release of the GH1, FILA has announced that they will also be re-releasing the GH2 which has left many sneaker heads asking for re-release of the GH3's!!!!! During Grant Hill's prime, I can't think of any other basketball star that made FILA more popular.

The early 90's were good to FILA. I remember my father being dressed from head to toe in FILA gear. Only time will tell if the Grant Hill III's will be re-leased but until then fans can only hope.
Posted by The Real Dwayne Allen at 9:51 AM