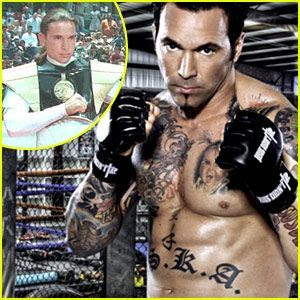 Former Mighty Morphin Power Ranger, Jason David Frank, known mostly for his roles as the Green Ranger and the White Ranger has made the transition into a MMA fighting machine. A six degree black belt, Frank looks to climb the ladder of success in mixed martial arts and hopefully make it big in the UFC. A perfect 5-0 in amatuer status, its only a matter of time before Jason Frank makes a name for himself in the sport of MMA fighting. My advice, don't beat on him too bad because if the going get tough, all your going to hear is "It's Morphin' Time" and then its a wrap!!!!!!

Posted by The Real Dwayne Allen at 9:21 AM