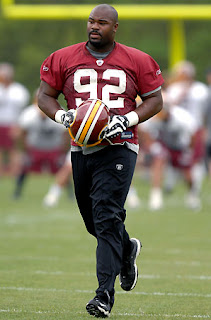 2 time All-Pro defensive tackle, Albert Haynesworth did not even attempt his third attempt Tuesday which resulted in failure of yet another conditioning test. Haynesworth first failed the test Thursday, then ago on Saturday and then didn't even attempt it on Tuesday. It has been declared that Haynesworth will not be permitted to practice until he passes. Can you believe they're paying this guy 100 million dollars??? This makes great television!!!

Posted by The Real Dwayne Allen at 9:39 AM