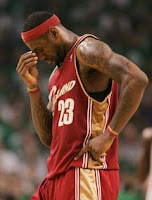 After all the speculation that Lebron James and the Cleveland Cavaliers were the front runner for this year's NBA title, they have been eliminated by the Boston Celtics in game 6 of the Eastern Conference semi-finals. Boston's attack, led by Kevin Garnett's 22 point performance along with Rajon Rondo's 21 points, and game high 12 assists, spearheaded the onslaught that finally put the Cleveland Cavaliers season to rest. Lebron James' 27 points, 10 rebounds, and 10 assists just weren't enough to fend off the balanced attack of the Boston Celtics. The Boston Celtics will now move on to face the defending Eastern Conference champions, the Orlando Magic.
Posted by The Real Dwayne Allen at 8:21 PM