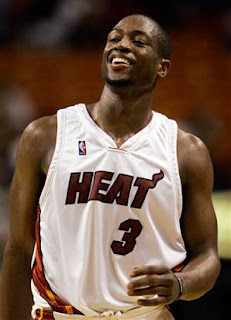 There has been speculation that the amazing free agent class of 2010 NBA players could shake up the basketball world as we know. With a number of displeased superstars, NBA franchises are on the brink of losing their long time meal tickets to another fledgling franchise with cap room to pay these superstars what they ask for. After a long hard fought season with the Miami Heat, Dwyane Wade now faces a decision that could impact a number people including players and NBA executives alike. One of the biggest free agents of the 2010 class, there has been speculation that Wade may make a jump to the New York Knicks along with fellow free agent superstar Lebron James to revive a once historic basketball franchise. There also has been chatter about Wade's new found affiliation with Chicago Bulls Legend Michael "Air" Jordan and his thoughts of returning home to Chicago to bring life back to the Bulls with second year sensation Derrick Rose. Only Time will tell.
Posted by The Real Dwayne Allen at 2:28 PM