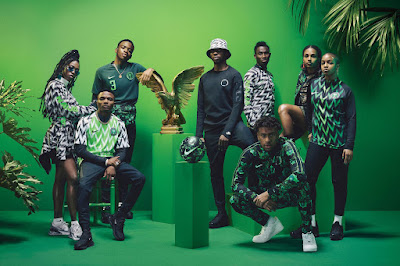 After breaking pre-order records — and becoming one of the stories of the 2018 World Cup — the Nigerian football kit has been nominated for the 2019 Beazley Design of the Year award. The award, which is described as “revealing the most innovative designs of the last year,” featured merchandise from Kanye West, a collection by Aitor Throup and a Wolfgang Tillmans campaign on last year’s shortlist.
Nike’s Nigeria kit has been shortlisted in the fashion category, where it is joined by Christopher Bailey’s Burberry Rainbow Check, the costumes from Black Panther and Telfar’s Fall/Winter 2018 collection. Other notable names on the shortlist include Rihanna, who’s Fenty Beauty range is in the product section, and Gucci, with the #GucciHallucination campaign celebrated in the digital category. Elsewhere, Elon Musk’s SpaceX is nominated in the travel category for its Falcon Heavy rocket, where it sits alongside the Virgin Hyperloop One.
A  winner will be chosen from each category — as well as one overall winner — which will be announced on November 15. All of the shortlisted designs will be on display at London’s Design Museum until January 6 next year. via Hypebeast.com
Posted by The Real Dwayne Allen at 9:34 AM