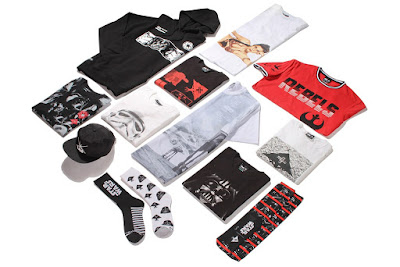 Last month it was revealed that Disney and Lucasfilm had partnered with LRG as the officialStar Wars clothing sponsor in anticipation of Star Wars: The Force Awakens. Today we reveal the project’s full clothing line, which takes direct inspiration from Episodes IV, V and VI of the space opera franchise. The collection features various Star Wars logos and motifs from beloved characters like Darth Vader and Princess Leia, which holds a red, white and black color palette. References of the Dark Side and The Resistance also interplay with graphics taken from the textures and landscapes from “a galaxy far, far away.”
Watch out for this Star Wars x LRG “The Force Awakens” collection to hit LRG.com as well as select authorized retailers November 25. via Hypebeast.com

Posted by The Real Dwayne Allen at 9:41 AM